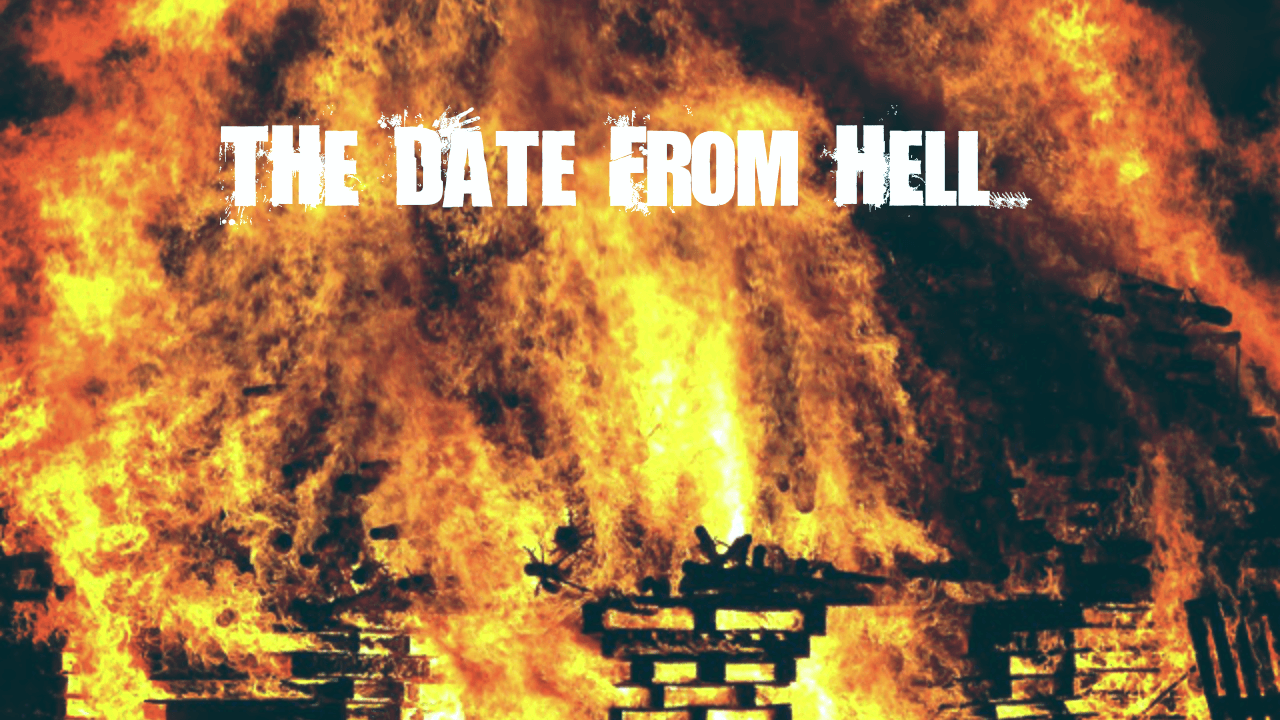 The Date From Hell…

Little did I know it would be the date from hell!

Yeah, I said it Peter I know.

Watch the video version below:

I remember that when I saw her at the bar she had this aura around her face and I felt like Garth in Wayne’s World…?


It was a cool night because I was at a Halloween Chive meet up thingy with my buddy, and they also had this cool thing where you could use a sledge hammer to beat up a car for 5 smackers.?

That’s pretty metal if you ask me.?

I wanna say that in my drunken stupor I took a couple of swings at the car, but it’s been some time and the memeory (hee hee typo but I think I just accidentally invented a word so I’m leaving it) is fuzzy.

I remember hanging out with the chick and thinking it was a great night.

That was not the case, damn you to heck drunk Phil.

So I go on a date with this chick about a week later.

Alert CNN, this chick actually answered me after texting her! Fucking miracle there.

Well I want my giggles back (kudos to you if you get that reference).

I ended up going on a date with this girl and it turned out to be a terrible one. THE END.
…

Just kitten, let’s continue on shall we?

Ok, so I get to her apartment and…

SHOCKER: she wasn’t as “hot blonde from Wayne’s World-y” as my beer goggles had?lead me to believe.

She SEEMED fun the other night so I didn’t bolt right away. Mistake.

So before we leave, she says she has to have a smoke first.

I don’t know about you but I’m not a fan of smoker chicks.

I’ll have an occasional fag (and I’ll sometimes smoke a cigarette) every once in a while when I’m drinking, but it comes out to about 3 cigarettes a year.

See what I did there? Tee hee hee.

Just never took off with me and that’s a good thing.

We end up going to a place called Boomer Jacks in Arlington, Texas.

So we have an ok conversation UNTIL?I heard her say something that was extremely alarming:

She was a waitress and told me about how she hocked loogies (GROSS and NOT cool) on tea-ordering peoples’ lemons when they weren’t 100% nice to her.

How disgusting is that?

So we have some more beers and I’m like “Ok, maybe it’s not so bad…”

She says “Let’s go to this other restaurant and meet up with my friends.”

So we get?to this Italian restaurant where her buddies work at and are joining us after their shift (in case you didn’t know, people that are servers usually are friends with other servers lol). All of her “buddies” are guys and…

She proceeds to only talk to them and I’m there like an idiot.?

I resort to just drinking because I brought this chick here in MY?friggin’ car and I badly wanna ditch her.

Oh just to add a lil’ more icing to this shit cake, she was an alcoholic and had NO qualms whatsover about ordering multiple drinks on captain dipshit (that’s me just FYI).

STRIKE FOUR (you’re not only out, you deserve piss in your cheerios lol).

So FINALLY?$100+ and a complete shitty date later we go back to her place.

Homegirl still likes the look of yours truly even after ignoring him all night, but I left her place in a heartbeat as she stood at the door in bewilderment.

MORAL OF THE STORY

You can usually tell when something isn’t going to work out.

Let’s say you’ve been buying up every digital product up under the sun, and you KNOW that you’re not gonna implement the training,?or it’s some re-hashed BS from dudes playing the JV circle-jerk game.

For instance, if you LIKE making FB Live videos…make them and make them often.

Of course you can always repurpose them for YouTube or something like that IF you want to, but if FB live is all that is working for you then…FUCKING DO IT THEN!!

Do?it often, learn that shit as good as you can by doing it instead of just studying and saying you’re gonna do it (trust me, I speak from experience).

“Phil, dear baby Jesus…you’re making so much sense!” you say.

So then my young Padawan learner: What bullshit have you (or are you) let/letting into your life and wasted/wasting time on DESPITE probably knowing better?

Is there something you can do about it?today to stop the madness?

If so, leave a comment below and let Dr. Phil (hee hee) hear you out.

(It’s for reals this time) -Phil “looks like a husky?David Boreanz” Lopez

You be the judge.