Behind The IM Curtain…

UPDATE 8-6-16: I liked Moses Njoku’s suggestion so I went with his, thanks bro!

So I’m sitting here in a hotel room in San Antonio, Texas.

MacBook in my lap, ready to write…check

There’s some infomercial type o’ thing going in in the background on the TV.

“Just send 5 payments of $19.95 for Johnny Carson videos” and now they’ve moved on to Bob Hope and USO show stuff.

I’d like to say that I have a desk I’m working at and that I have all distractions put aside, but I really don’t.

So what, I’m still creating something lol.

I had no idea what this would be about and I’ll probably add a title later…OR better yet you can help me name it in the comments below.

I’m really just doing this to show you that you don’t have to do anything way too crazy to create content.

Pretty sure I’m gonna add a funny pic from this trip I’m taking here to San Antonio with my beautiful girlfriend as my featured image (she made me say that after that pic, bahaha jk).

Anyhoo…ah yes, now I know what I wanna talk about.

“Where are you going with this Phil, you Adonis you?” says you.

I don’t want to do this BS brown-nosing I see in the IM industry.

There’s these product launches all the friggin’ time right.

I was speaking with a good friend of mine and I learned about some shady shit that didn’t surprise me too much, but did make me realize that I don’t have to be friends with everybody in the IM industry just because they’re successful.

If I don’t agree with their ways, then I don’t need them.

This really reminds me of when I was steam-cleaning carpets a long, long time ago in a galaxy far, far away.

Meh just kitten, it was in Grand Prairie, Texas.

I worked about 60 hours a week busting my ass cleaning animal piss and shit stains (mostly I hope from animals) and whatever the fuck else from peoples’ carpets.

It sucked lugging a heavy machine up stairs, filling it with water and…well you get the point.

It was a shitty blue-collar job.

Wasn’t my first time having a manual labor type o’ job either, I used to be a construction worker, a welder, worked in a fabrication shop (kitchen countertops) and some other crap.

Basically, it sucked ass but I was making enough to pay dem bills.

Here’s what really chapped my ass.

It was the unethical mofos (I soon came to find out the whole company was run by scam artists).

They’d lie saying that they were putting “sanitizer” in the carpet when it was just some smell-good bullshit.

They’d tell people they needed some premium stuff when the people really didn’t.

Now I don’t mind a company recommending something, but these dudes flat out LIED on the regular and, here’s the KICKER..

THEY DIDN’T EVEN ADD IT!!

Not much later, our company had a meeting and the main boss guys, these twin dudes were talking about upselling and other business stuff and these words came out of their mouth:

“You see, the customer doesn’t know it’s a scam.”

Apparently, these dudes had a 7-day guarantee and were getting all kinds of complaints, but the BS small print in their contract allowed them to continue their scam…and I was in the middle of it working for them.

I couldn’t even quit really because I had bills to pay and had no other promising jobs.

I finally quit after some time, they even tried to pull some BS by firing me first because I said I couldn’t show up on Saturday.

They tried to hold my last check too, but then they needed me to come in because their was a high turnover since the only guys making money were the scam artists and most people have a soul.

I said I’d come in and work, but said “hey I need my check” and they obliged.

As soon as I got it, I walked out and never returned to see those crooked SOBs.

Does this sound familiar?

I think there are some guys out there making money re-hashing the same BS and slapping some fancy graphics on there.

I think it’s ridiculous how there’s some launches out there with 4 people involved in a $7 product.

I’ve Been Around The Block

I think that some of you more experienced (but not necessarily even super successful IMers) out there know what I’m talking about.

If you’re like me, you may be sick of seeing this shit left and right, lord knows I am.

Look, if you are I’m going to recommend some things and I’m going to cleverly put my hidden affiliate link in them.

Just kitten they’re there (hmm that just looks weird on paper…or screen, shit that looks weird too, screw it) because I AM an internet marketer and I have bought THOUSANDS of dollars worth of IM products.

I’ve even been mentored by Alex Jeffreys, more money there.

I’ve been around the internet marketing block for some time now and have made some moolah, created a product or two and have seen some success.

If you’re looking to start list building, I absolutely recommend It’s All You Need  by Señor Lee Murray.

There’s a very cool way to do this in there (this is more of a “choose your adventure type of way to make money online” and I Totes McGotes learned a lot from it, you can too.

However, you may not want to write all the time.

I gets it so for you my dear Watson I recommend 24 Hour Income Machine.

This is a kick-butt lil’ product by Ben Martin and it’s a way to make a product in 2-3 hours, set it up on Warrior Plus and selling the damn thing.

Here’s a screenshot from 3 products he’s got out there right now and these all came out recently.

Homeboy is crushing it with them! 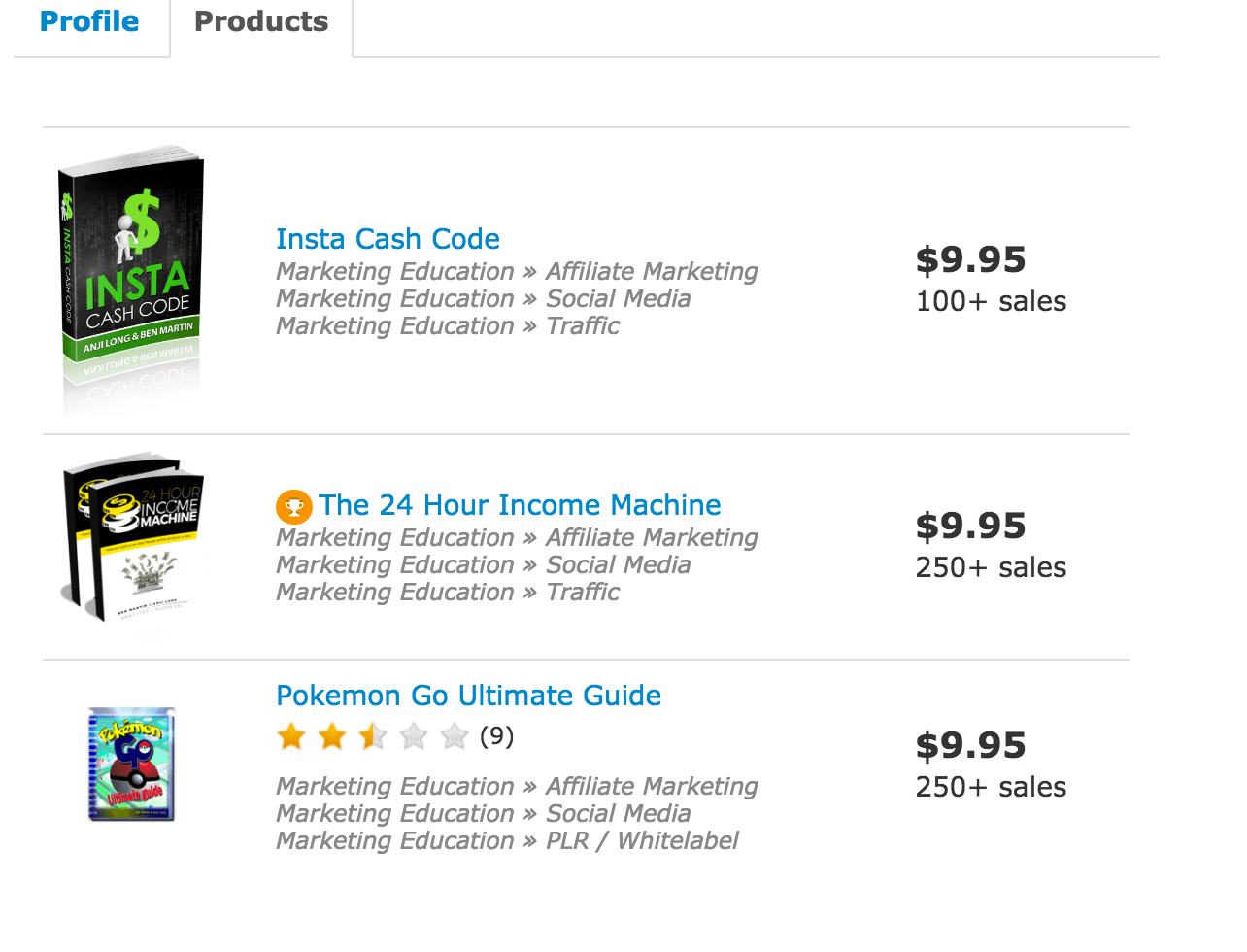 Finally, you may be wanting a something that teaches you how to set up a blog.

I don’t blame ya, it’s really a good way to be seen more as an authority if you do it the right way.

Well that’s EXACTLY what y0u can learn in Brett’s Circle.

I must warn you that this is the most expensive product in this bunch at $27, but the one where you will probably learn the most.

Just look up any major software review and see if brettrutecky.com doesn’t come up son.

This dude is a 7-figure marketer and he’s just a stand up dude, you can really learn a lot from him because you get access to his FB group and he personally answers your IM questions.

That’s pretty much it.

I’ve bought or have had review access to ALL of these products and these work.

I’m just sick and tired of the re-hashed/circle jerk game you see in the IM industry.

If you haven’t seen it yet because you’re a fresh-faced newbie…well you will and then you’ll be pissed off too.

If you want to save yourself that realization a year or 2 (or God forbid 5 years from now) check out one of the products above or wait to hear from me on a new one as I get review access or I just flat out buy something on my own because of my own “Shiny Object Syndrome”.

Thanks for reading my lil post with no name.

Hey, how about you help me title it?

Leave your recommendation below, try not to make it too vile lol.

-Phil “I’ve been pimpin since pimpin was pimpin…pimpin” Lopez

Nice blog post man! I really thought the thumbnail on the video was cool. Keep cranking it out dude. YOu rock!

Yeah man, I cranked that out on Paint Pad with an extremely unsteady hand lol.

Thanks for the input Big Kam.

Hey Phillip. Nice article man. Title: The truth, the whole truth and nothin but the truth!

Hey thanks a lot Casey.

I know I can bring good information to people
without being a spammy, unethical dude.

You’re one of those good guys man, love your
content bro.